Vlychada Diros Cave is one of the most beautiful caves and is located on the west coast of the Laconian Peninsula, in the Bay of Diros. Beneath the landscape of Mani, nature with incomparable art and patience sculpted a miracle beyond any imagination, white stalactites and stalagmites, impressive stone curtains and glittering crystals adorn every corner, creating an incomparable breathtaking spectacle.

In the area there are two caves, Vlychada and Alepotrypa. The existence of the Vlychada cave has been known to the locals since about 1900. But no one, until 1949, suspected the miracle that hid inside, when the founders of the Hellenic Speleological Society, Giannis and Anna Petrochilou, began to systematically explore it.

By 1960, 1,600 meters had been explored and mapped. From 1987 the department of Paleoanthropology and Speleology of the Ministry of Culture began the detailed study of the Cave and in collaboration with an international group of cave divers, continued its exploration and mapping. To date, 14,700 meters of routes have been mapped. Notably, most of the Cave is below the surface of the water.

The cave began to form hundreds of thousands of years ago. The stalactites and stalagmites that are now under water formed when the sea surface was much lower than its current level. Stalactites have been found at a depth of 71 meters. The maximum depth of the Cave has been located outside the tourist route and reaches 80 meters.

The water that penetrates the cracks of the limestone and dissolves it, literally creates drop by drop, the decoration of the cave. The precipitation of dissolved calcium carbonate forms stalactites and stalagmites very slowly.

The natural entrance of the cave is only half a meter in diameter and is located very close to the sea surface. In earlier times the cave had other entrances which gradually closed. Fossilized bones of panther, hyena, lion, deer, ferret and the largest deposit of hippo bones in Europe have been found in the cave. Ceramics suggesting human presence have been found near its natural entrance.

The brackish water inside the cave has a high hardness level. Its temperature is about 14 ° C, while that of the air ranges from 16 to 19 ° C.

The route that is currently available for visitors has a total length of 1,500 meters of which the first 1,200 are accessible only by boat and the tour lasts about 25 minutes.

The doors of the cave were opened for the first time for the public in 1967, when the Greek Tourism Board completed the settlement work that had begun six years earlier.

Important anthropological findings from the Neolithic era were discovered in the adjacent cave of Alepotrypa. Many of them are on display in the museum next to the entrance of this cave. 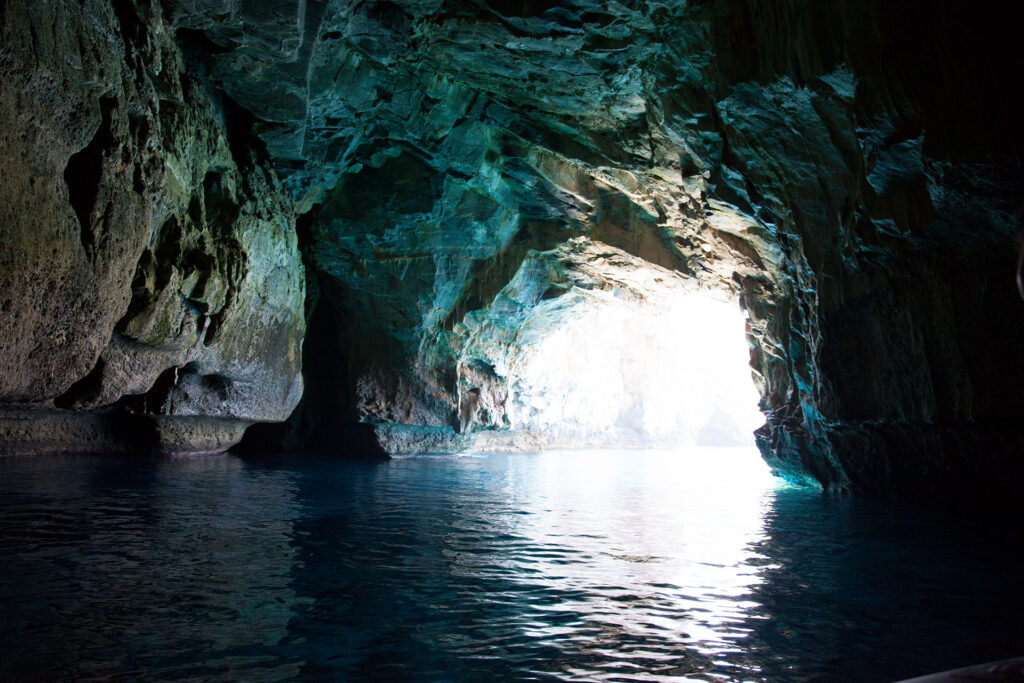